West Ham climbed back into the race for a top four finish in the Premier League as Jarrod Bowen sealed a 2-1 win against Everton that kept the visitors deep in relegation trouble on Sunday.

David Moyes’ side moved up to fifth place thanks to Bowen’s second half winner at the London Stadium.

Aaron Cresswell’s fine free-kick put West Ham ahead in the first half before Mason Holgate equalised soon after the interval.

Bowen, back after a month out with a foot injury, restored West Ham’s lead and Everton were effectively out of the contest when Michael Keane was sent off midway through the second half.

Frank Lampard’s team have two games in hand on third bottom Watford, but their proud record of playing in the top-flight every season since 1954-55 remains under serious threat.

They were more committed in their first outing since then, but there was no improvement in the worst away record in England’s four professional divisions this term.

A trip to second bottom Burnley on Wednesday looms as a vital clash in Everton’s fight for survival.

Beaten in two of their previous three league matches, West Ham are now just three points behind fourth placed Arsenal, who face Crystal Palace on Monday in the first of their three games in hand on the Hammers.

While West Ham remain outsiders to qualify for the Champions League, they cannot be ruled out of the race.

Lampard suffered a blow before the match had even started when Donny van de Beek was injured in the warm-up.

There was no sign of Everton’s luck improving when Richarlison blew a golden opportunity to put them ahead, rounding Hammers keeper Lukasz Fabianski, only to hesitate long enough for Ryan Fredericks to clear.

West Ham made the most of that escape as they took the lead in the 32nd minute when Cresswell curled a superb free-kick into the top corner from 25 yards.

Moments later, a poor touch from Fredericks gave Richarlison a clear sight of goal, but the Brazilian wastefully flicked his shot over.

Dominic Calvert-Lewin clipped the bar with just Lukasz Fabianski to beat early in the second half, leaving Lampard grimacing in frustration.

Holgate, only playing after the injury to Van de Beek, grabbed the equaliser in the 53rd minute with a strike that deflected in off Fornals’ out-stretched boot after West Ham failed to clear a corner.

But West Ham were back in front just six minutes later as Alex Iwobi carelessly surrendered possession, allowing Michail Antonio to accelerate into the Everton area.

Antonio’s shot was saved by Pickford but it rebounded straight to Bowen and he clipped a clinical finish over Jonjoe Kenny’s sliding attempt to block.

As if that wasn’t bad enough for Lampard, in the 65th minute Keane was dismissed after a crunching foul on Antonio triggered his second booking.

It was the third successive league game with a red card for Everton, encapsulating a season teetering on the brink of disaster.

Later on Sunday, Tottenham can move into fourth place if they beat Newcastle by two or more goals. 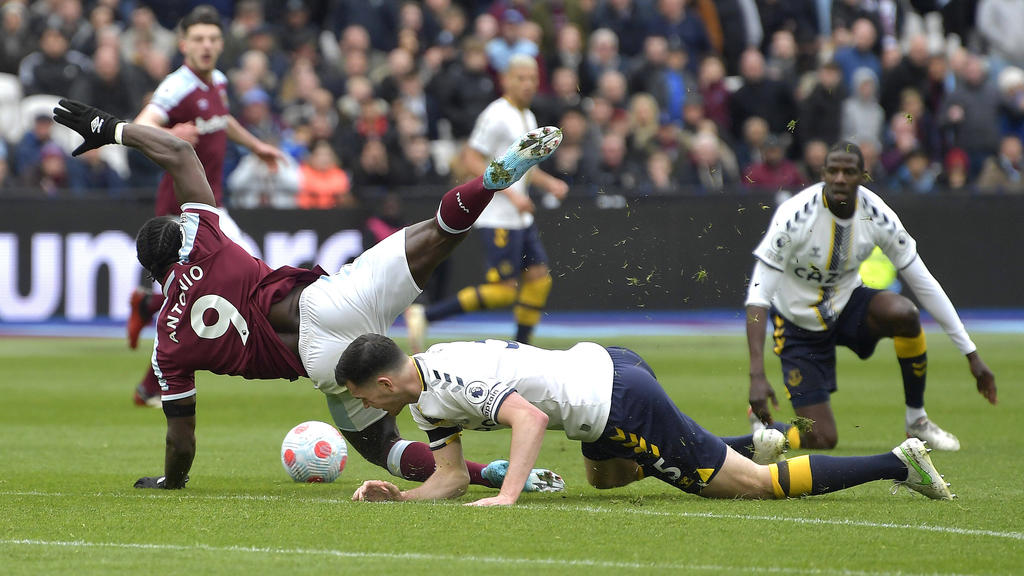